Why Open Plan No Longer Works for Office Space in Washington, D.C. 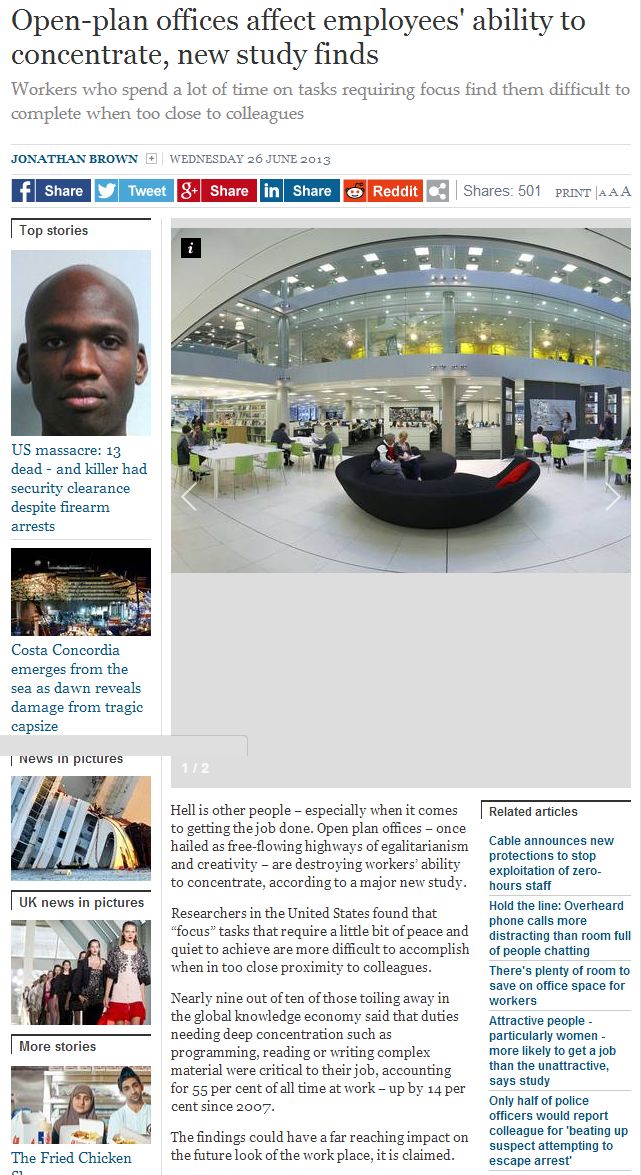 Open-plan offices used to be the quintessential workplace in the pre and post-war periods with their free-flowing arrangement of desks and appliances. However, this office is proving less effective today, reports Jonathan Brown of The Independent. New research shows that the absence of barriers in the office was affecting workers’ ability to focus on the job at hand. This poses a risk for jobs that need the utmost focus: programming, accounting, and clerical among others.

Open-plan offices arrange desks and work areas in random positions, allowing for quick access just in case someone needs help with something. While some open-plan offices use partitions, they don’t use them as much as other types of offices. One of the most notable examples of open-plan offices is the Pentagon, which adopted it for clerical work shortly after its construction. The typical Washington, D.C. office space can be an open-plan office, given that the city houses duties that require constant contact.

However, a study containing 2,000 responses from workers shows that 25 percent are dissatisfied with open-plan offices. When the walls came down around the 1960s, researchers say, the challenges facing open-plan offices increased over time. Workers in open-plan offices had to put up with the sound of their colleagues engaging in idle talk, as well as the fact that privacy died with the walls. It was difficult to concentrate with these distractions.

Aside from being distractions, open-plan offices also pose a serious health risk. In a recent study published on the Scandinavian Journal of Work, Environment and Health, workers in open-plan offices tend to take 62 percent more sick days than those in enclosed spaces; the researchers believe that bacteria and germs spread more easily without barriers and enclosures getting in their way. Several other research teams that conducted similar studies after this support the findings.

Experts say there’s a need for modern offices to focus on a balance between private and public space; after all, there are instances when a worker has to perform tasks alone to focus better and produce quality output. A well-constructed Washington, D.C. office space with enclosures can be a promising alternative to the century-old open-plan system, albeit more expensive. In choosing an office, cost will hardly mean anything when compared to the productivity and safety bonuses an office can provide.

It’s not too late to change office layouts; experts believe a major redesign of the modern office may be in order. Choose offices from providers such as Metro Offices wisely; think about how workers see the office and feel about it. While there’s a clamor for the open-plan office to be put to bed, there is always room for improvement.