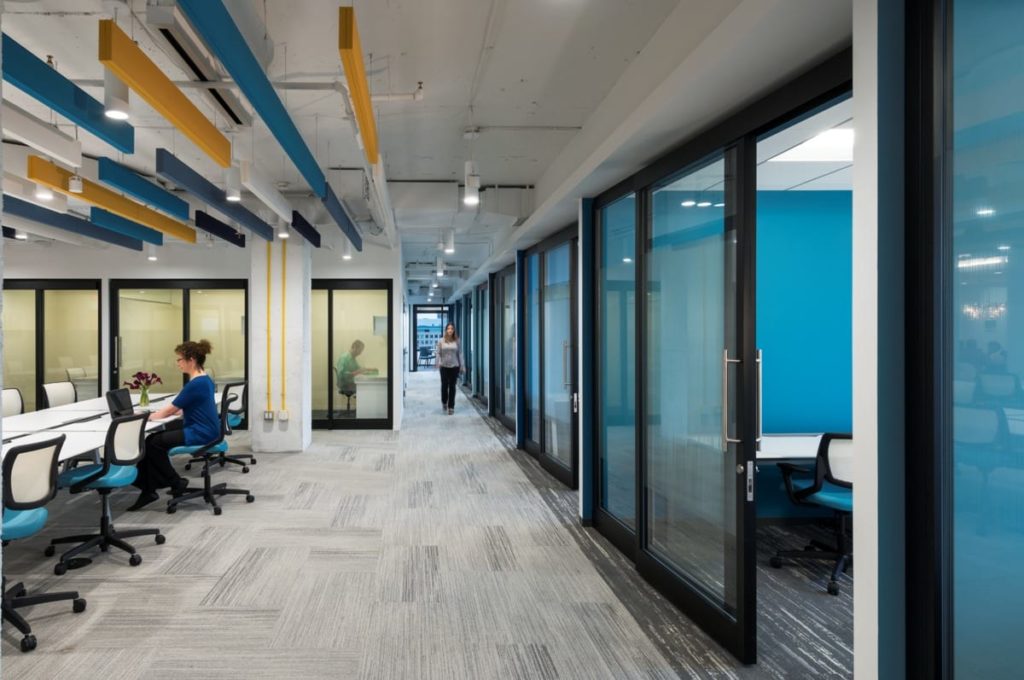 Let There Be Light: A Look at Office Lighting Design Best Practices

You may be surprised to find that one of the biggest factors in worker productivity, alertness, and mood can be found in the ceiling and on your desk: lighting. Studies have shown that the wrong kind of light can strain eyes, disturb sleep patterns, contribute to headaches and, perhaps of most immediate interest to employers, reduce initiative and output in workers.

What’s more, employees have taken notice of the abundance of lousy lighting in offices, and they’re not happy. According to Forbes, in a recent survey, “80 percent of office workers, said that having good lighting in their workspace is important to them, and two-in-five (40 percent) are having to deal with uncomfortable lighting every day. A third (32 percent) said better lighting would make them happier at work. However, when access to natural sunlight is so limited in the winter, many are feeling stressed and suffering from seasonal affective disorder (SAD), and often spend long hours at their desks which is sometimes their only access to light during the day. The results have also shown that 25 percent of the surveyed are frustrated at having to deal with poor lighting in their workplaces.”

By contrast, natural lighting boosts mood, worker productivity, alertness, and cognitive performance. So what’s an indoor employee to do? Luckily, there’s hope for those who spend their workdays surrounded by walls. Below, we lay out five best practices for office lighting, so you can stay focused, alert, and headache and eye-strain free.

Given all the benefits of the right amount of exposure to natural light, this one’s a no-brainer. As much as possible, try to ensure your workers have access to sunlight at their desks.

“[D]aylight … has been found to be the number one wanted natural feature in the workplace,” according to a piece in eco-business.com. “When you see the research findings, it’s easy to see why. One neuroscience study found that people who sit by the window slept for 46 minutes longer a night on average compared with those who didn’t. Other studies have found that well-illuminated spaces with natural elements such as daylight and greenery can improve creativity and learning. These findings put scientific rigor behind our intuitive desire for daylight. The business case is clear: daylight promotes human health and potential. Workers around the world are catching on, with many starting to question how this valuable natural element should be shared between staff.”

Obviously, there are only so many windows in any given office space, and only so many work stations with access to natural light. To that end, managers should consider rotating employee work spots. In a study of call-center employees who rotated seats while at work, those who sat by a window were responsible for generating thousands of dollars more each year than those who did not. Plus, [e]mployees who have more exposure to natural light sleep longer, exercise more, and have a better quality of life than those exposed to less light,” according to a blog post by UK interior-design firm Dale Office Interiors.

“The combination of different light sources contributes to a lighting concept that can be adapted to the different light requirements,” according to a piece on lightingdeluxe.com. “The use of direct and indirect lighting … is very important.”

Have flicker- and glare-free light sources

Among the visual factors likely to induce a headache, a glare is pretty high on the list. While having a window near your workstation is a definite plus, the glare that can go with it is not. So if you’re lucky enough to have that source of natural light, try to make sure your desk is parallel to it. A window directly in front of or behind you is pretty much a guaranteed computer-screen glare producer. You also may want to consider an on-desk lamp, which can add a softer light that reduces glare.

You’ll also want to be sure to keep light-source flickering to a minimum. One easy way to do this is to move away from fluorescent lightbulbs which, while cost-effective, are the most prone to flickering. That can mean a whole host of bad things for your health.

LED, or light-emitting diode, bulbs produce light far more efficiently than old-fashioned incandescents. According to Radio.com: “Switching to LEDs has been shown to increase the attention span, mood, and performance of office workers and other employees by as much as 25 percent.” LEDs may be more expensive up-front than their cheaper competitor, fluorescent bulbs, but unlike fluorescents, LEDs allow for adjustment in light-color temperature, and that’s important, especially in an office.

While this may not be possible in all workplaces, allowing for customizable lighting that each employee is able to adjust to his or her own preferences and sensitivities is ideal. Consider purchasing desk lamps (or “task lights”) with dimming controls and adjustable color-temperature toggles. Worried that a few dozen of these will break the bank? Don’t be; they can be quite budget-friendly.

Of course, different people have different light sensitivities, so if even those overhead LEDs bother some of your team members, with an adjustable task lamp at each work station, sensitive employees can feel free to turn off overheads altogether (as long as they clear it with fellow space sharers, of course).